Over 55s are 25% more likely to shrink their monthly bills by being energy efficient than the younger generation, according to a new survey from Opus Energy, an independent electricity supplier for UK businesses.

The survey asked over 500 people about the energy saving steps they take both at home and at work. The findings showed that when it comes to tightening belts this Christmas the “baby boomer” generation are steps ahead of younger generations. Having lived through two recessions and grown up in post-war Britain, the over 55s are well versed in making those small steps that add up to real financial savings.

The results showed that the over 55s are well versed at making efficient use of modern technology. In the workplace, the baby boomers are three times more likely than dilligently switch off phone chargers when not in use, with 43% switching of compared to just one in ten (13%) of under 25s making the effort.

The baby-boomers also have the most ‘efficient’ tea breaks at work with more than half the over 55s (55%) taking care not to boil more water than they need each time compared to under a third (27%) of under 25s. 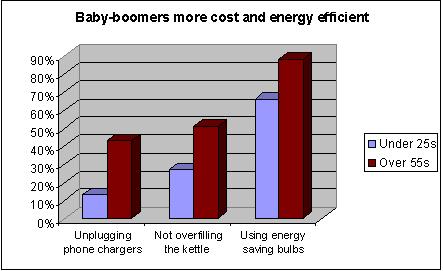 Even though two thirds (66%) of young Brits claim they are switching to energy saving bulbs to help curb costs at home, a staggering nine out of ten (88%) over 55s said they had already made the energy efficient swap.

Under 25s were also more likely to think that making a business or a home energy efficient would increase its running costs. But as the baby boomers are clearly demonstrating, when energy costs are high and belts are tightening, small energy saving steps can be enough to equate to big savings.

“It’s clear that having lived through two recessions, our older generations are more adept at taking steps to save on their energy usage to cut their bills. What is interesting is that the older generations have really embraced the energy saving benefits of modern technology, to an even greater degree than their younger counterparts.

“Technology such as energy saving bulbs can be more expensive in the short term, but over their life time will save you up to £35 in electricity costs. It’s a myth that being more environmentally friendly has to be more expensive. At Opus Energy, we source over half our energy from renewable generators and cleaner, low-carbon sources as standard. This way all the businesses we supply enjoy cleaner energy with minimum fuss and no extra cost.”

About Opus Energy
Opus Energy is a leading independent supplier of electricity offering tailor-made solutions for the UK SME and corporate markets. Its market-leading innovations are driven by customer needs and the company is committed to helping businesses reduce their carbon footprint through procurement of energy from cleaner sources.

Over the last two years (between April 2006 and March 2008), 62% of the energy supplied by Opus Energy to its customers came from cleaner, low-carbon sources – 54% from renewable generators and 8% from cleaner Combined Heat and Power (CHP) produced by CHP generators. These CHP generators have been awarded accreditation by the regulator, Ofgem, for producing cleaner, more environmentally friendly power.

Opus Energy’s management team has a 50 percent stake in the business, while International Power Plc (LSE:IPR.L) holds 30 percent and Telecom Plus Plc (LSE: TEP.L ) has 20 percent. With offices in Northampton and Oxford, it employs 200 people.

Opus Energy, an independent supplier of electricity to UK businesses, won an 18 month contract with Sandwell Homes worth in the region of £1million.

Sandwell Homes, which is responsible for managing 30,000 council properties on behalf of Sandwell MBC, wanted to be proactive in becoming more environmentally responsible. Opus’s simple approach of

sourcing cleaner energy for every customer appealed to Sandwell’s vision for both the company and the borough.

Sandwell Homes’ Environmental Manager, Tony Thompson, said: “This is the first step in a series of environmentally friendly measures planned for Sandwell Homes. We will be reviewing our waste, recycling and transport CO2 emissions and hope to make savings for the company and on behalf of the taxpayer in the long-term. We are committed to influencing the local community by setting the example and reducing our carbon footprint.”

Members of Sandwell Homes’ new environmental steering group signed up to the eco-challenge by painting their hands green and marking a symbolic giant footprint at the start of the group’s first meeting.

Steve James, Commercial Director at Opus Energy said: “We are really enthusiastic about supporting Sandwell Homes in their goal to be environmentally responsible. We worked closely with the team to suit the company’s individual requirements and were able to source a cost neutral renewable energy which is Levy exempt. We will also be installing smart meters at no additional cost which is a great way of monitoring and reducing electricity consumption.”

• Opus Energy will be installing over 800 smart meters at Sandwell Homes sites
• The Carbon Trust suggests that smart metering could reduce the average business’ consumption by 12.3% a year
• Other councils using smart meters include Cambridge and Cumbria City Councils

Opus Energy is a leading independent supplier of electricity offering tailor-made solutions for the UK SME and corporate markets. Its market-leading innovations are driven by customer needs and the company is committed to helping businesses become more environmentally responsible through procurement of energy from cleaner sources.

Over the last two years (between April 2006 and March 2008), 62% of the energy supplied by Opus Energy to its customers came from cleaner, low-carbon sources – 54% from renewable generators and 8% from cleaner Combined Heat and Power (CHP) produced by CHP generators. These CHP generators have been awarded accreditation by the regulator, Ofgem, for producing cleaner, more environmentally friendly power.

Opus Energy’s management team has a 50 percent stake in the business, while International Power Plc (LSE:IPR.L) holds 30 percent and Telecom Plus Plc (LSE: TEP.L ) has 20 percent. With offices in Northampton and Oxford, it employs 200 people.

Small businesses in the UK are being urged to be energy efficient and save up to 20% on energy bills as the economy continues to bite.

The call comes as energy company npower completes a series of small business energy makeovers which have shown that saving energy is often one of the easiest ways of reducing costs and can be done through simple steps that together make a big difference.

npower’s energy efficiency makeovers have helped four businesses cut their energy spend by £1,200 and, at the same time, reduce CO2 output by almost 4.9 tonnes. With many SMEs facing difficult trading and financial uncertainty, npower believes these energy efficiency measures serve as examples of the cost savings that can be achieved in all workplaces.

Reducing the air conditioning temperature setting in a pub by a mere 2 degrees C will provide a cost saving of some £232 a year, while energy saving measures implemented at a printing press will be enough to cover the running costs of one of its machines everyday for nearly four months. Simply defrosting the fridge freezer and replacing lighting will contribute to cutting a car auction’s energy bill by £300, while draught proofing doors and changing light bulbs in a shop could lead to savings of £400 on its energy bills.

The team replaced light bulbs with energy saving equivalents; defrosted fridges and freezers; switched kettles to eco-friendlier alternatives; adjusted air conditioning and fitted reflective radiator panels; fitted timers to electrical equipment to switch if off when not in use; draught-proofed doors and even installed a wind-up radio and solar powered phone charger, substituting them for existing electric equivalents

“At times like these, every penny counts and we’ve demonstrated simple steps that small businesses in any sector can undertake to save money.” said Steve Fitzsimons, business energy manager at npower.

“Our recent survey has shown 60% of British adults believe that energy is being wasted in their businesses yet when you’re busy running your company it can sometimes seem difficult to dedicate time to cutting costs. Putting in place a range of energy saving measures for little or no cost will cut their energy bills without compromising operations,” added Fitzsimons.

Businesses wanting advice on cutting energy bills should visit npower, where they can sign-up to receive an advice pack and free Current Cost monitor, which will help them track how energy is being used.

About npower:
npower is dedicated to helping UK businesses use energy more efficiently and therefore spend less money on their bills. npower aims to have a positive impact on the communities it serves and reduce customers’ carbon footprints whilst always improving the service to customers.